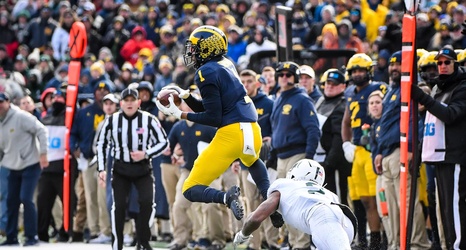 Last night, the first of the postseason high school All-Star games took place in Orlando. The Under Armour All-American Bowl has long been one of the premier collections of football talent from across the country, and Michigan was well-represented this year. Four commits were selected to play in the game, and two players, four-stars Blake Corum and Andre Seldon really showed out in the game.

Arguably nobody had a better performance during the week of practices leading up to the game then Seldon, the 5-foot-9 cornerback from Belleville. His height has long been the ceiling on his ranking, but Seldon proved he could stand up to best talent in the nation, even breaking up a pass against 6-foot-7 five-star tight end Darnell Washington during practice.