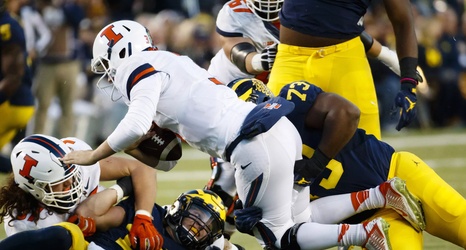 Michigan squares off against Illinois this week in what should be another tune up contest before the two-game gauntlet of Penn State and Notre Dame.

Both recent and overall series results against the Fighting Illini are quite favorable for the Wolverines, who lead the overall series 70-23-2 and have won 10-of-12 matchups dating back to 2000.

The teams don’t play all that often, however, with the programs playing just once in Jim Harbaugh’s tenure and four times since 2010. Michigan won all four of those games, which came after two straight losses to Illinois.

Here’s a look at the four most recent meetings between teams:

Michigan dominated Illinois in the lone recent meeting between schools.