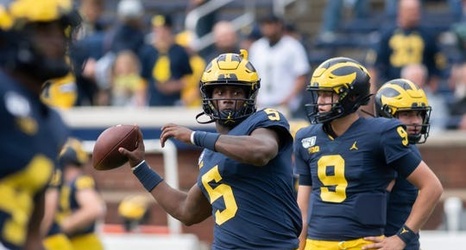 Orlando, Fla. – While Michigan quarterback Joe Milton has been waiting for his opportunity, he has been working to improve himself and his game. He has taken leadership classes at UM, learned to scale back his high-velocity throws, develop more touch, and he has embraced patience.

Milton, the 6-foot-6, 245-pound uber-talented quarterback who attended nearby Olympia High and expects 40 family members to attend Michigan’s Citrus Bowl game against Alabama on Wednesday, has been waiting his turn while Shea Patterson has directed the offense the last two seasons.

Dylan McCaffrey has been the backup to Patterson, but Milton is right there, and Cade McNamara is also part of the quarterback room and all are expected to compete for the starting job now that Patterson is moving on.