No. 4 Illinois wallops No. 2 Michigan 76-53 at Crisler Center as Big Ten race tightens 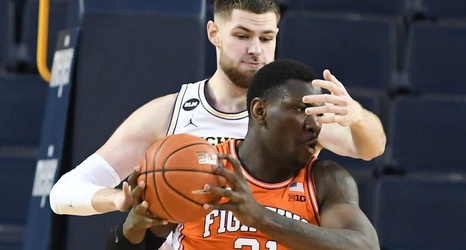 Ann Arbor — Michigan had its sights set on clinching a Big Ten regular-season title and putting an end to the program’s six-year drought.

Illinois had other plans.

The No. 2 Wolverines had the celebration put on hold as they were suffocated from start to finish by the No. 4 Fighting Illini and turned in their worst offensive outing of the season in a 76-53 beatdown Tuesday night at Crisler Center.

Senior guard Eli Brooks was the lone Wolverine to score in double figures and finished with 11 points for Michigan (18-2, 13-2 Big Ten), which lost for the first time at home this season and saw its seven-game win streak come to an end.