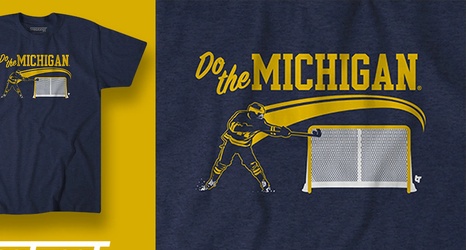 In 1996, Michigan Wolverines hockey player Mike Legg scored a goal that is now known today as the “Michigan” goal. He picked up the puck on his stick and wrapped it around the top corner of the net to score a lacrosse-style goal.

That play has been well-known in the hockey world ever since, but it is now finally starting to get the love and recognition it deserves by sports fans everywhere. And now you can get your hands on some brand new apparel released by our friends at BreakingT honoring the goal-scoring craze that started right here in Ann Arbor!