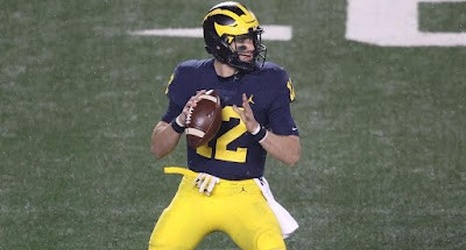 The Tom Brady - Drew Henson Michigan QB curse has continued for too long. For those too young to remember what happened: Michigan had the greatest NFL QB ever playing very consistently but also had the #1 recruit in the nation and local boy Drew Henson as his backup. At that time, the Golden Boy was Drew Henson. The Michigan faithful didn't hate Tom but thought that Drew might be the better QB. Tom as a senior leads Michigan to win over Alabama in the Orange Bowl and the next year Drew gets hurt and then leaves a year early to play baseball for the Yankees.