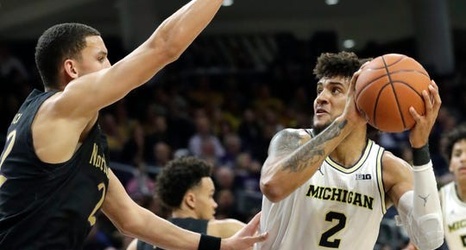 Evanston, Ill. — Michigan coach Juwan Howard noticed all the maize and blue in the stands during the national anthem. He saw his friends, family and former NBA teammate Dikembe Mutombo behind the bench.

More importantly, Howard witnessed his team pick up a road victory in what turned out to be a happy homecoming in his first trip back to the Chicago area.

Michigan shook off a slow start with an overwhelming first-half run and never looked back as it ran over Northwestern, 79-54, Wednesday night at Welsh-Ryan Arena.

“That was beautiful. It was great to have that support,” said Howard, a Chicago native.