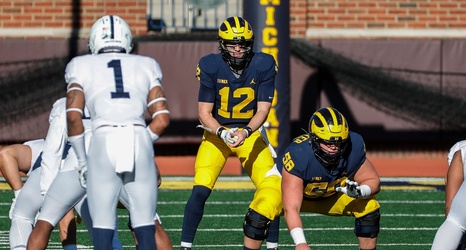 Cade McNamara left Michigan football's 27-17 loss to Penn State on Saturday with a right shoulder injury, and his status remains uncertain, according to coach Jim Harbaugh.

“Yeah, Cade, we'll see or evaluate that as the week goes on here,” Harbaugh said during his weekly news conference Monday. “But don’t know. See how the recovery comes.”

McNamara made his first career start against the Nittany Lions but appeared to suffer the injury when he scrambled on second-and-goal during Michigan's second possession. He stayed in the game and handed the ball off on the next play, but received immediate medical attention once he left the field and eventually went into the locker room.