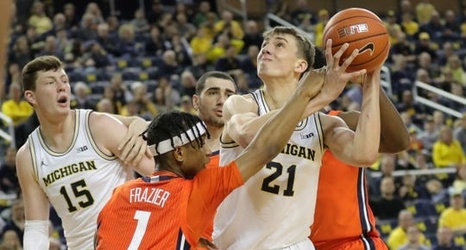 Saturday was supposed to be Isaiah Livers' triumphant return.

Instead, Illinois' Ayo Dosunmu spoiled the party, hitting a game-winning jumper with 0.5 seconds remaining to beat Michigan basketball, 64-62, at Crisler Center. And to add injury to insult, Livers appeared to re-aggravate his groin injury, casting a pall over the rest of the season.

Even without Livers, the Wolverines came close to beating the Illini. Michigan held a lead at the end of the second half — but couldn't put the game away at the free-throw line. The Wolverines missed five consecutive free throws, failing to establish a multiple-possession lead.