Michigan basketball already looking to what could be a special March: 'Go get that natty' 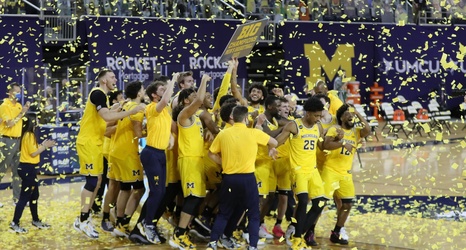 Two years ago, Michigan basketball watched as Michigan State celebrated a Big Ten title after beating the Wolverines by 12 at the Breslin Center.

One by one, the Spartans' seniors exited the game to standing ovations, kissing the logo at center court as they made their way to the bench.

Thursday night, Michigan returned the favor by clinching its first Big Ten championship since the 2013-14 season with a 69-50 win over Michigan State at Crisler Center on Senior Night.

“I just remember them celebrating on their court after they clinched it against us,” said guard Eli Brooks.