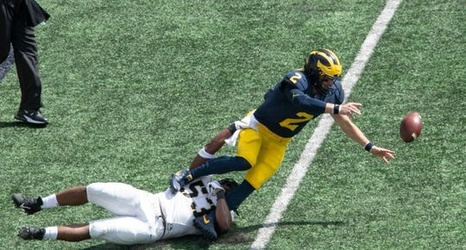 After an uninspired first-half performance by the Wolverines, Giles Jackson returns the second-half kickoff deep into Army territory ... and it's called back for a blind-side block.

Michigan will start at its own 13-yard-line.

Zach Charbonnet is wrapped up after a gain of only 1 on first down. Dylan McCaffrey comes in at quarterback, throwing incomplete to Tarik Black. He comes right back out of the game. Shea Patterson is sacked on third down. Things could get very real very soon.

Will Hart's punt is fielded by Akyah Mirana and returned to the Michigan 35.