Life after The Hit: The amazing second act for Michigan's Vincent Smith 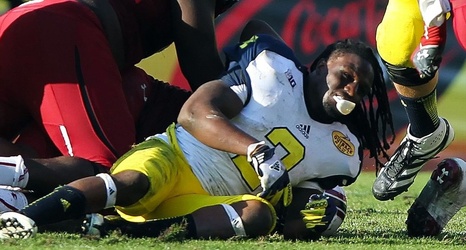 Vincent Smith is building momentum. He takes two short strides, sinking his hips like a retracting pinball plunger, and then launches himself clear over an 8-foot swath of freshly tilled and seeded earth. Smith gathers the five-gallon bucket of winter rye seeds next to his landing spot and moves on to the next patch of dirt.

It's late October in Michigan, and Smith is doing what he can to prep his garden-in-progress for the cold months ahead. The vacant lot he is trying to repurpose sits two blocks from the infamous Flint River, which in recent years delivered lead-tainted waters to the citizens of one of the Rust Belt's most down-on-its-luck cities.