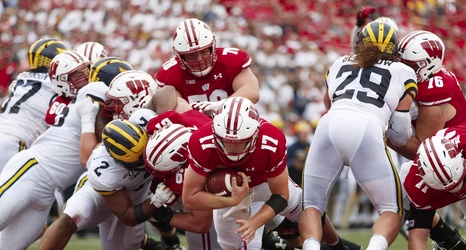 Michigan head coach Jim Harbaugh spoke to the media following Michigan’s 35-14 loss at Wisconsin. Harbaugh discussed how Michigan was outplayed, outcoached, and called it a gut-check. Harbaugh also updated Dylan McCaffrey’s injury status after suffering a nasty hit and was asked about if he’s concerned with the play-calling on offense.

Tight end Nick Eubanks also spoke with the media about Michigan’s identity on offense and how he wished Michigan stuck with the running game.

Here’s a compilation of quotes and videos from the two.

Harbaugh on Michigan being outplayed and outcoached

Eubanks said he saw some guys with their heads down when Michigan went down 14-0.