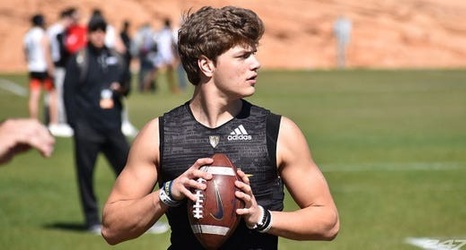 J.J. McCarthy stunned himself when, on take four, he was able to sling a football about 45 yards while seated, his legs crossed, over a fence and, swish, through the basketball net.

He shared the video early last month on Twitter and dubbed it, “Bored at the crib.”

McCarthy is a five-star quarterback committed to Michigan’s 2021 class, which has 11 members so far that he actively stays in touch with while also encouraging other recruits to join this group heading to the Wolverines. He’s going into his senior year having led the Nazareth Roadrunners to the Illinois Class 7A title as a sophomore and a runner-up finish after junior season.