Hunter Dickinson dominant in showdown with nation’s No. 1 recruit 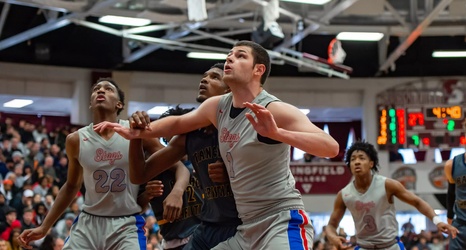 Exactly one month to the day after verbally committing to the Michigan Wolverines, 2020 four-star center Hunter Dickinson put on a show against the No. 1 overall recruit in his class — five-star center Evan Mobley, a USC commit.

Dickinson’s Dematha Catholic squad played against Mobley’s Rancho Christian as a part of the 2020 Hoophall Classic Monday evening. About a minute into the first quarter, Dickinson went down with a nasty looking knee injury.

Thankfully, Dickinson was able to get back into the game to begin the second quarter, and boy did he ever come back in dominant fashion.