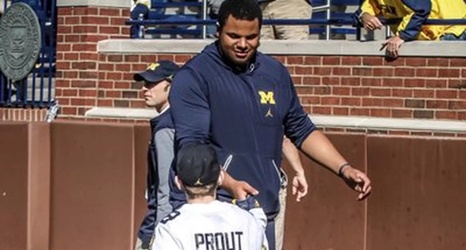 Michigan announced this morning that former offensive tackle Grant Newsome will also serve as an honorary captain this week next to Brenda Tracy. Earlier, Newsome tweeted his support of Tracy both quote-tweeting and re-tweeting her announcement:

Newsome, a towering left-tackle, started the first four games of 2016 before a terrible knee injury against Wisconsin ended his season and career. He’s maintained a visible presence with the team as an assistant tight ends coach.

Michigan takes on the Western Michigan Broncos at noon this Saturday.