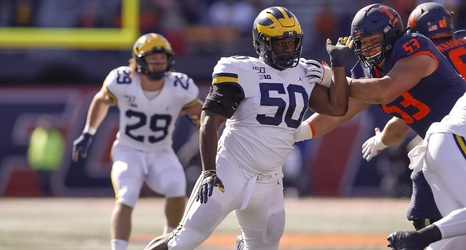 Defensive lineman Michael Dwumfour last week announced his plans to transfer and move on from the Michigan Wolverines and now he has a destination. Dwumfour announced on Monday that he will be heading back to his home state of New Jersey to play for the Rutgers Scarlet Knights.

I am coming home because I am all in! Can’t wait to join the F.A.M.I.L.Y. and get to work! #CHOP pic.twitter.com/hJ2hzCEudJ

Dwumfour, a former three-star recruit in the class of 2016, played in 33 games in his four seasons in Ann Arbor.