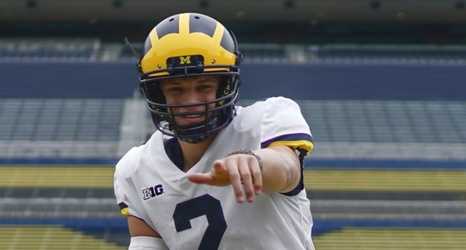 Five-star quarterback J.J. McCarthy is the face of the 2021 recruiting class for the Michigan Wolverines, as it has been a long time since the program brought in a passer of his caliber. In the first football game of senior season — and debut at IMG Academy — he once again showed why he is regarded as one of the nation’s elite.

McCarthy led IMG to a 49-13 win over Venice on a nationally-televised contest on ESPNU and finished the evening 23-of-37 for 333 yards, five touchdowns and no interceptions in the victory. The performance earned him GEICO Player of the Game honors.