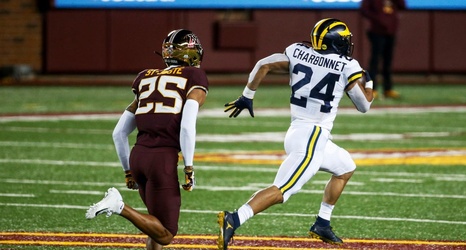 Here are four key takeaways from the first half of the Michigan-Minnesota game, which featured quick-strike scores, dominant defensive plays and the emergence of Joe Milton as the Wolverines' No. 1 quarterback in the battle for The Little Brown Jug. After scoring 21 points in the first quarter, Michigan will take a 35-17 lead into the third quarter.

As expected, Joe Milton started at quarterback and was 8-for-13 for 93 yards and one touchdown in the first half. His first pass on the first series was to freshman Blake Corum for a 24-yard gain.