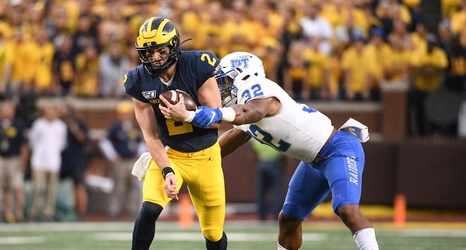 Thanks to a shortened week due to the holiday, we are already mid-week and another day closer to the second weekend of college football action in full. There’s lot to discuss here today, so let’s get right into it.

Many of us thought that Michigan quarterback Shea Patterson suffered a minor injury towards the end of the first half of the opener against MTSU after what looked like a shot to the ribs on a sack. But one report suggests that it occurred much earlier than that, as in the first play of the game.

Bleacher Report draft analyst Matt Miller said on Tuesday night that a source informed him Patterson’s ailment happened on the first play of the game, which ended in a Michigan fumble.