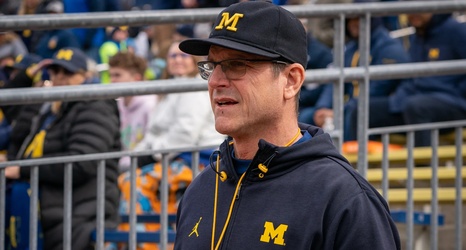 Jim Harbaugh and the Michigan Wolverines hired Jesse Minter out of Vanderbilt for their defensive coordinator job. As a man who was not on many radars, Minter came as a surprise to a lot of the maize and blue faithful. However, the former Boyles Award nominee worked with former Michigan defensive coordinator Mike Macdonald previously in Baltimore.

However, that is not all that led Harbaugh to offer the job to Minter. According to Bruce Feldman at The Athletic, Harbaugh asked prospects to come prepared with ways to stop their two biggest rivals.

“In addition to getting to know each coach, Harbaugh wanted the candidates to have a big-picture plan readied for the Wolverines’ defensive personnel in 2022, specifically for Michigan State on first and second downs and Ohio State on third downs.