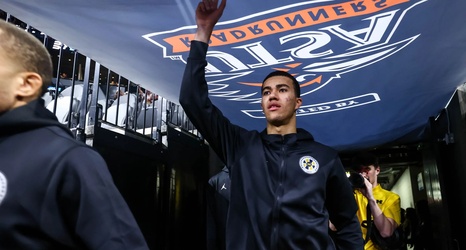 With only four teams remaining in the NBA playoffs, Mock Draft season is in full swing, especially after last night when the lottery set the order for next month’s draft.

The two Michigan players who entered their names into the NBA Draft, Caleb Houstan and Moussa Diabate, have been featured sparingly in mock drafts over the last few weeks. But for the first time this spring, Houstan has been projected by a major draft analyst to be taken in the first round.

ESPN’s Jonathan Givony projected Houstan to be picked by the Oklahoma Thunder with the 30th overall pick, saying that despite spotty play in his freshman season, he has the size and the shooting ability to earn some minutes in the NBA.