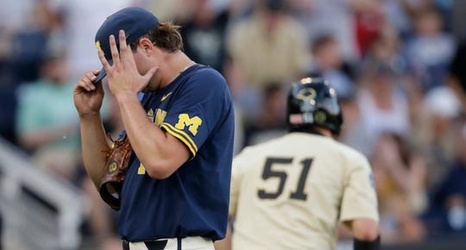 Omaha, Neb. — This wasn’t how Michigan envisioned its fairy tale postseason run ending. This was never the last page in the Wolverines’ minds. Ever.

The Wolverines had been in multiple back-against-the-wall moments during the NCAA Tournament, faced down elimination in the NCAA Regional and Super Regional against the top-ranked team in the country, and were unfazed by the prospects of an even series in the best-of-three College World Series national championship.

But Vanderbilt had something to say about how the final chapter would be written in the deciding game Wednesday night at TD Ameritrade Park.