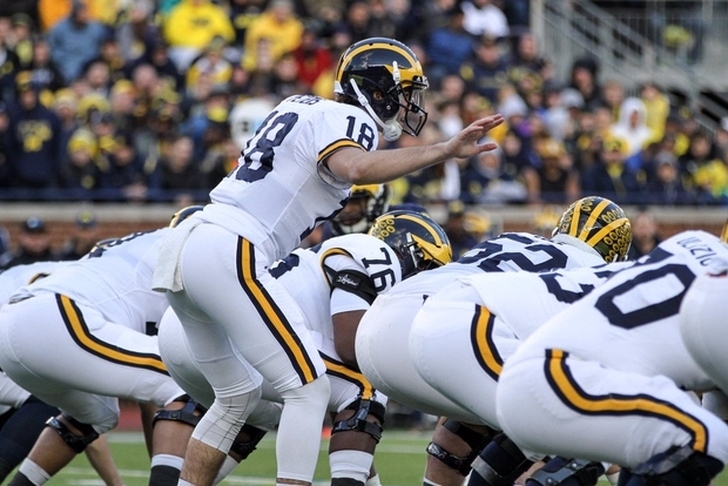 Not every player on the roster will be listed, since there's no real need to include walk-ons who won't play. Instead, think of this as an expanded two-deep depth chart. And, with fall camp yet to begin, much can and probably will change. With that in mind, here's Michigan Football's depth chart projections after the spring.

The QB battle is no longer between Speight and O'Korn like it was last year. It's now more of a race between Speight and redshirt freshman Brandon Peters. After Speight struggled to close the year and then was outplayed by Peters in the Spring Game, many have called for Peters to be the starter. Speight still holds the advantage, but it's closer than expected. Dylan McCaffrey, the younger brother of Christian McCaffrey, will redshirt this year barring a crazy string of injuries.

Click Here For The Latest On Michigan Football Recruiting

"Starter" might not be entirely accurate, because the Wolverines will use a running back by committee next year. But Evans is the top guy right now, even if the other three are in line for work as well. Isaac is the top pass blocker and has better size than Higdon and Evans. Higdon and Walker continue to develop and will get work. This is a quality foursome and will be the focal point of the Michigan offense.

This is the fullback/H-Back position, one Michigan loves to use. Hill scored a bunch last year, but Poggi played plenty as well. At least for this year, Michigan is set at this spot.

Starters:
Kekoa Crawford, So. (Outside)
Tarik Black, Fr. (Outside)
Eddie McDoom, So. (Slot)

There are plenty of bodies here, they're just young ones. Crawford and McDoom played last year, but now they need to take the step from bit-players to focal points. Black has the edge among the freshman wide outs, but don't count on Peoples-Jones. He battled injuries during spring practice, but he's too good to redshirt. He might be a starter before the end of fall practice and will at the very last see the field. Ways and Johnson are solid depth, while Harris might be caught in a numbers game. Schoenle shined in the spring game and could build on that in fall practice. Perry's future is in doubt and it's unclear if he'll even return to Michigan.

With the losses of both Jake Butt and Devin Asiasi, Ian Bunting has taken hold of the No. 1 TE spot. Of course, Michigan will use more than just one tight end and Wheatley is next in line. Both could play key roles this year. Eubanks, who has bulked up, has the edge over McKeon and Gentry for the No. 3 TE role.

Runyan and Bushell-Beatty remain in a battle for the right tackle spot and that job won't be decided until well into fall camp. It's a narrow race, but Runyan has the slightest edge right now.

Cole and Bredeson can move around the line, but they'll like stay on the left side barring injuries. They'll get intermittent work at other spots, just in case something happens. Onwenu seems like a good bet to start at right guard.

Ruiz is behind Kugler at center, but that might not stay the case if he takes a step forward in fall practice. But, Michigan might elect to redshirt Ruiz and give him the job next year.

Spanellis is listed as a guard, but he could be the first off the bench in the event of injuries. If an injury happens, don't be surprised if Michigan shuffles the line around. Both Robinson and Vastardis are walk-ons who Michigan would prefer not to play. Chuck Filiaga and a few other freshmen aren't listed because they aren't enrolled yet. But Filiaga in particular could easily be above the walk-ons come end of fall.