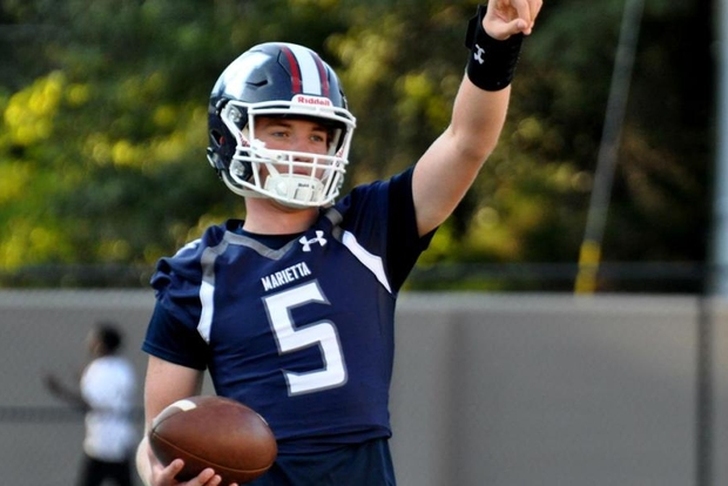 The Michigan Wolverines have a pretty stable quarterback situation with Shea Patterson taking the reins for at least the 2018 season and Elite 11 prospect Cade McNamara committed in the 2019 class, but the coaching staff is still placing a major emphasis on the position.

Perhaps their top quarterback target in the 2020 recruiting class is four-star quarterback Harrison Bailey (Marietta, GA), who is "really into" the Wolverines, according to his father Orvel.

“He wants to be in a pro-style system," his father told The Michigan Insider. "I think what’s key in my conversation with Harrison is that he wants somebody that’s going to help him… all kids desire to go to the NFL. All these kids that do this, they start playing football because of the NFL or a college guy that they watch growing up. He wants to be an NFL quarterback. He wants to be around staff that can get him to that level. And of course, it helps with coach Harbaugh and coach Hamilton that those guys have been there.”

Bailey visited both Michigan and Ohio State this week, and his father said the Wolverines made a very positive impression on them.

“Harrison is not the type of kid that wants you to come in and pat him on the back and tell him how great he is,” Orvel said. “He’s the type of kid that if you challenge him, it piques his interest. And from what I understand in my conversation with Harrison, Coach Hamilton came in and it was like he was already on campus.”

‘Alright… let’s talk about football. What do you know about this, this and this?’ When Harrison didn’t know something it was like ‘why don’t you know this? Why can’t you do this? This is what you do.’ So, that really piqued Harrison’s interest. He really responds well to coaches like that because he feels he’s going to get the best out of the coach – versus telling him he’s the greatest thing in the world. He’s just not that type of kid.”