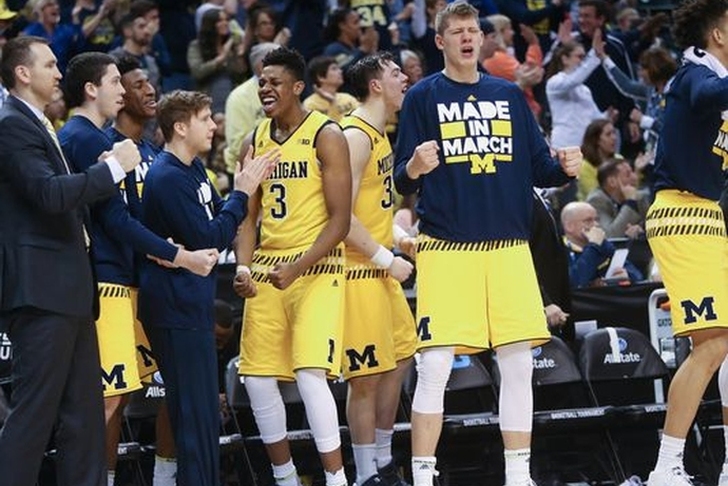 The Michigan Wolverines knew they needed a big win in the Big Ten Tournament if they wanted to have hope of earning an at-large bid to the NCAA Tournament. They got it by beating the Big Ten regular-season champion Indiana Hoosiers 72-69 in the conferece tournament quarterfinals after pulling off a dramatic comeback thanks to guard Kameron Chatman's three-pointer with 0.2 seconds left.

Michigan started out strong and held a six-point lead early in the first half, but Indiana quickly erased that deficit and led 37-36 at halftime. Both sides continued to go back and forth in the second half as no team was ever able to get more than a four-point advantage until the last three minutes.

Indiana went on a 7-0 run to turn a two-point deficit into a 66-61 lead, but Michigan responded with a 11-4 run of their own in the last two minutes to close the game - capped off by Chatman's three.

Guard Zak Irvin stepped up to lead Michigan offensively, scoring a game-high 17 points to go along with five rebounds. Point guard Derrick Walton Jr. struggled from the field and scored just two points, but he did set a Big Ten Tournament record with 12 assists. Chatman was the most unlikely of heroes for the Wolverines, having made just seven three-pointers all season before his game-winner.

However, the team's biggest contribution may have come from Muhammad Abdur-Rahkman, who guarded Indiana star Yogi Ferrell for most of the night and limited him to just 14 points on 5/10 shooting.

The loss continues what has been a troubling trend for Indiana. Under head coach Tom Crean, the Hoosiers are just 4-10 in Big Ten Tournament Games held in Indianapolis despite being one of the top seeds every year.