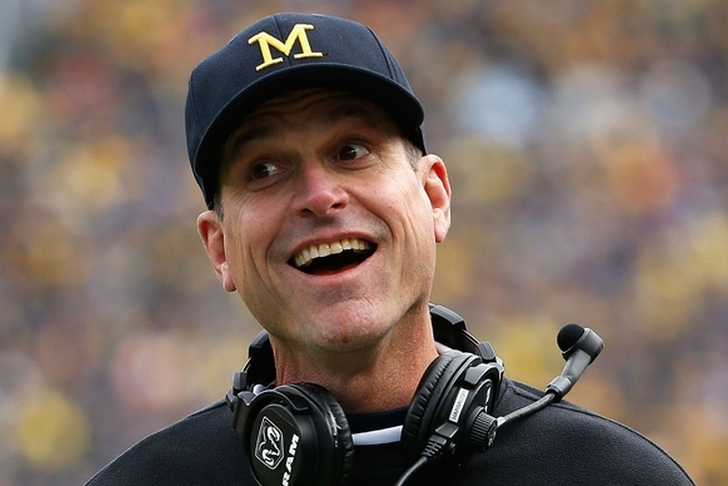 Michigan football coach Jim Harbaugh might have the most epic "Twitter game" out there, and tonight he brought it in full strength in response to a dig earlier today from Ohio State Athletic Director Gene Smith.

Smith was asked by reporters this afternoon about Michigan's spring break camp at IMG Academy in Florida, and his response was "Harbaugh-like":

Ohio State AD Gene Smith on holding spring practice in Florida: "If we were jump starting our program, I'd probably try to do that too."

But, as you can imagine, Harbaugh was going to come back in full force to take a shot back, like he has recently to Georgia coach Kirby Smart and Tennessee coach Butch Jones. More in the Chat Sports app - click to download.

Just now, he tweeted the following about being "relevant":

Good to see Director Smith being relevant again after the tattoo fiasco. Welcome back!

The “tattoo fiasco” is obviously referring to the 2011 NCAA sanctions handed down to Ohio State after players received special benefits (including tattoos) because they were on the football team. The sanctions led to the dismissal of legendary Buckeyes coach Jim Tressel and cost All-American QB Terrelle Pryor his senior season in Columbus. More on this story in the Chat Sports app - click to download - - the ONLY app with every story on the teams you love.

During the scandal, Smith received widespead criticiscm when he responded to a question about Tressell's job security (before he was let go) with a response of "I just hope he (Tressel) doesn't fire me!."

Shots fired. If Harbaugh's coaching is as good as his trash talk, Michigan will dominate college football for years to come.