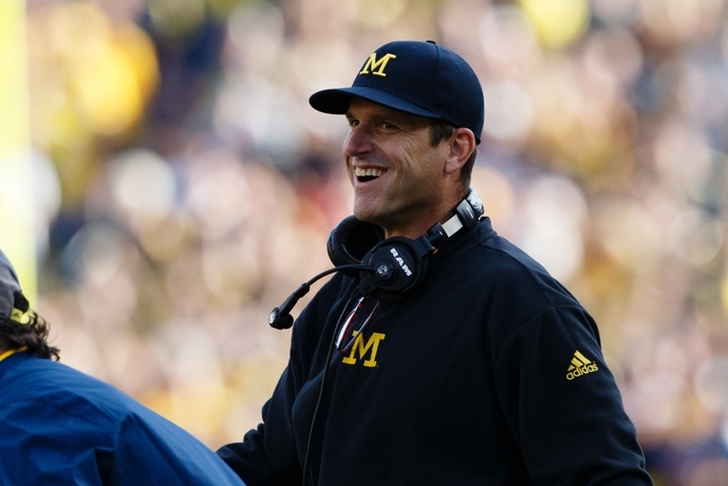 Jim Harbaugh has OWNED the offseason once again, seemingly making headlines every other day.

Do not be deceived. You will reap what you sow.

Then it was revealed he was headed to President Obama's State of the Union in Washington, D.C.

Then, he blew our minds with news that Michigan would spend spring practice in Florida.

Now, he has going a step further in a humorous, if not a tad odd, recruiting tactic....

Quinn Nordin, the nation's #1 kicker, has revealed that the Michigan coach plans to sleep over his house on Wednesday night at midnight, and spend a full 24 hours with the coveted prospect.

Nordin told Scout.com that Harbaugh not only would sleep over, but go to high school and attend all of his classes with the kicker from Rockford, MI.

“Under the exact rules, he’s going to be at my house at 12:01 he said. That’s when it’s legal for him to be at my house,” Nordin said. “He said we can watch a movie, see how well we gel and he said he would sleep over after that.

“I was in tears laughing when he said that. He said the next day, if my parents didn’t want me to miss school, he would go to every class with me and go to lunch with me. I was laughing so hard.”

Nordin, who is currently committed to Penn State, said Harbaugh plans to sleep on the floor in his bedroom and help him take down all the Penn State memorabilia and posters on his wall.

“He told me if I had a 6-foot-3 inch piece of carpet for him to sleep on, that would be enough. I said we have guest rooms, and he said ‘Tell you what, I’ll just sleep on the floor in your room.’ I said ‘Coach, I have Penn State stuff all over my walls.’ He said, ‘Tell you what, I can help you take it down.’”

Jim Harbaugh..you are either the best recruiter of all-time, or a crazy SOB....or likely, both.