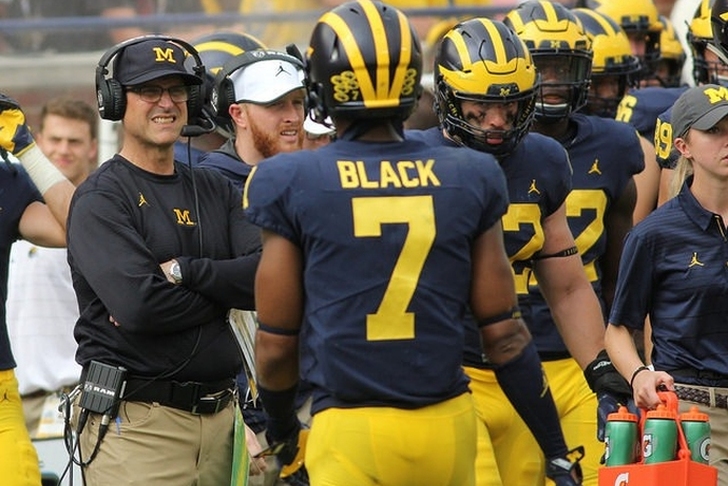 On If Michigan Is A Power Football Team And If It Took A Few Weeks To Determine The Team's Identity:
"Yes. Year after year, you could say the same of most teams, if not all teams. Identity is not there week 1, and you find out what your Identity is as the season progresses."

On The Wisconsin Offense:
"Very good players. Good scheme, tough schemes to defend. Physical play. Big physical OL. Seasoned QB. Outstanding running back. Very good WRs. A balanced attack that is very good and tough to defend. They run between the tackles, run on the perimeter. Distribute the ball in the passing game. It's multiple and very good."

On Karan Higdon And What He’s Added:
"He’s contributed greatly. As a power runner, inside the tackles. He’s been able to bounce the ball to the perimeter when appropriate. His pass protection has improved. Caught the ball out of the backfield better. Ascending player having a very productive year."

On The Similarities Between The Wisconsin Defense And Michigan Defense:
"It’s similar. Both teams really run to the football and play physical defense. Tough schemes and good players. Lots of similarities. They make it tough. They get off of blocks. Pursue and run to the ball. Both defenses are well-manned and well-coordinated.

On If Michigan Will Pursue A Medical Redshirt For Tarik Black If He Doesn't Return:
"Yes. If he doesn’t return, we would pursue a medical redshirt."

On Criticism of Wisconsin Because Of Their Schedule:
"I'm not aware of the criticism. They're undefeated. They're very good and we’re preparing the best we can to be successful. That’s all I really know about."

On Wisconsin QB Alex Hornibrook:
"I've always liked him. He’s a cool customer. Big stage is never an issue for him. From the moment he played his first game. Great demeanor. Very poised. Very good thrower. Slippery in the pocket. So many good things."

On Playing At Camp Randall:
"I have been [there]. Very loud. Great environment for football."

On Wisconsin RB Jonathan Taylor:
"We’ve faced a lot of good back this year. And Wisconsin’s RB is as good as any. Very physical back. Can push and move the pile. Gets more yards than what are blocked for. If it’s blocked for three he gets five. If it's blocked for five, he gets seven. Very impressive for a young back to be as physical and mature as he is. Tremendous balance and vision."

On The Challenge Of Facing Taylor:
"A big challenge. A big task for our defense. Got a very good, high-precision running game and a very good passing, very good passing game ... really good schemes. What kind of a challenge will that be? Stiff. A challenging game."

Check out our Michigan Wolverines team page for all the latest on Michigan Football or download the Chat Sports App!