Former Michigan player: "Nearly half the team was stoned during Appalachian State loss" 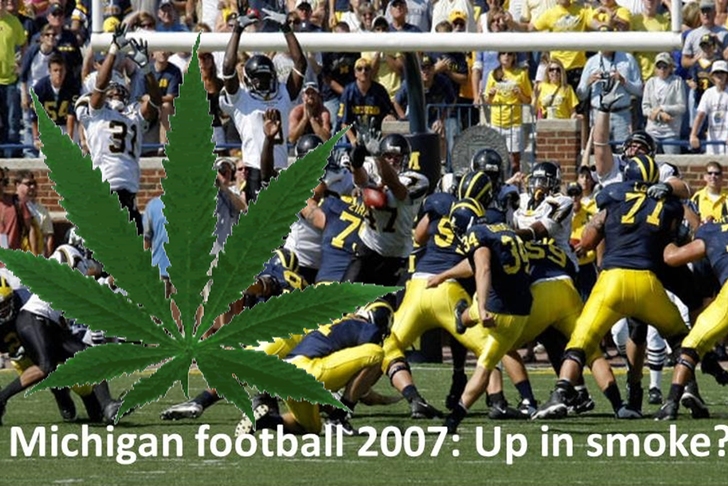 ***The following story was originally published in August 2012, and almost instantly blew up on social media and message boards. With Michigan starting their 2014 season with a rematch against Appalachian State, we thought there would be interest in one former player's account of what went down leading up to that fateful Saturday.***

In an exclusive interview with a former Michigan player who came to the school as a freshman in 2005, I was told some very disturbing information about the 2007 Michigan football team.

In a shocking revelation, this former player told me that over half of Michigan's defensive starters and several key offensive starters partied deep into the night the night before the 2007 Michigan vs. Appalachian State game, then smoked marijuana hours before kickoff in an effort to "see how bad we can beat 'em up if we were stoned." The player said that the Michigan secondary and linebackers were the main participants, but the ringleader was an explosive offensive playmaker who would later be suspended for a failed drug test.

According to the source, the 2007 spring and summer was one big party for the Michigan football team, with very little participation in voluntary off-season workouts - a big change from the previous season, when nearly the entire team worked out together and stayed away from the summer party scene. "There was a perception that we were going to be so good in '07 that everyone kind of thought the entire season was going to be a breeze, we would go undefeated for sure" said the former player.

"There were two different teams that off-season. A lot of the Ohio (high school) guys and guys from west coast stuck together, and were really into the party scene, the Michigan (high school) players and seniors were the other group. The really odd thing is that I don't think Chad (Henne) saw any of the receivers from the time spring ball ended until the first day of fall camp. We were just a bunch of guys with our own agendas and no sense of team. Once (LaMarr) Woodley and (David) Harris left after '06, all leadership was gone.

"Mike Hart tried to be a leader, but a lot of guys disliked him and resented him behind his back. Chad (Henne) or Jake (Long) really should have stepped up when they saw what was going on, but never did. It's funny that those guys all came back for their senior seasons to win a National Title, but no one ever did anything to make sure that would happen. It all came crashing down on September 1, App State day."

The entire week leading up to the Appalachian State game was a party:

"Everyone went out Thursday night before the game. Like, everyone. I remember some girl asking a few of the players if they were worried about the game Saturday and maybe they shouldn't be getting so messed up, all the players around her just started laughing hysterically. It was like all my teammates thought we were playing a junior high school team on Saturday.

"The night before the game, everyone was smoking pot and having fun at the team hotel, no coaches were bothering us. The next day, (game day), one offensive player in particular was the ringleader and was messing around trying to convince all the other guys that we could beat these guys stoned and how crazy it would be to be all messed up and still 'drop 50 on these fools'. For some reason, there was a ton of people who joined in. From what I saw and was told afterwards, six defensive starters and three offensive starters smoked up that morning. One guy in particular who I know did is the one who made the biggest error of the game and cost us a chance to win. I wonder why..."

When facing Appalachian State, Michigan players and coaches failed to take their opponents seriously. "The coaches barely even game-planned for App State regardless. We didn't prepare any differently or see any tape of their offense during game week. We were working on normal prep and facing our offense. Armani Edwards was having a field day on us because we didn't even know he was a fast dual-threat guy. The whole week is an embarrassment. Starting that day, I never enjoyed playing football at Michigan again. That was the day that Michigan football died. Hopefully, Hoke fully revives it. I know he is almost there, and that is awesome to see."

For the record, the player refused to name individual players.