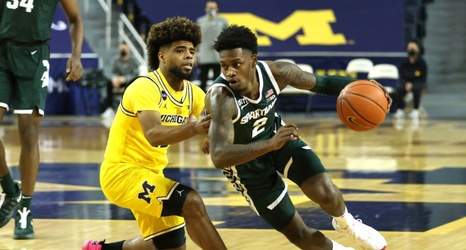 ANN ARBOR, MICHIGAN - MARCH 04: Rocket Watts #2 of the Michigan State Spartans drives around Mike Smith #12 of the Michigan Wolverines during the first half at Crisler Arena on March 04, 2021 in Ann Arbor, Michigan. (Photo by Gregory Shamus/Getty Images)

It’s been a few weeks since Rocket Watts his the transfer portal. After a disappointing sophomore season with Michigan State basketball, he decided to look for a change of scenery.

Right away, he received interest from some of the top programs in the country and other under-the-radar ones like Xavier and Connecticut which seemed like good fits for him.