MSU basketball - Is it a turnaround yet? 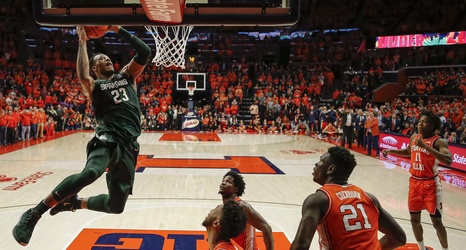 Watching Tom Izzo‘s postgame press conference on Tuesday night, after his team narrowly beat the Illinois Fighting Illini 70-69 on the road, you probably couldn‘t help yourself and figured that this legendary man on the podium felt quite a bit of relief. Why not? It was the first victory in four games, the first road win against a good team in conference play (sorry, Northwestern and Minnesota) and it kept the seemingly free falling Spartans right in the middle of the race for the Big Ten regular season crown. With a loss MSU probably could‘ve kissed those dreams goodbye for good, just like their mini midseason crisis might have spiraled out of control and threatened to drown all hopes of achieving anything meaningful on a national level later in March.