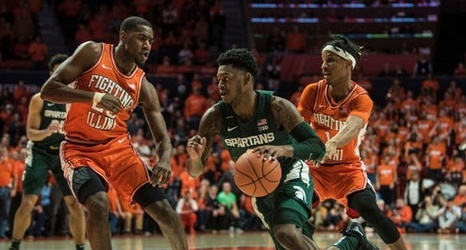 East Lansing — Hold off on the Rocket Watts statue for a game or two, at least.

That was the message from Michigan State coach Tom Izzo on Thursday, two days after the freshman guard scored a career-high 21 points on 9-for-14 shooting in a 70-69 victory over No. 22 Illinois.

“We’re just going to keep building with Rock and it will probably be a couple more games before we are building that statue next to Earvin’s,” Izzo said with a laugh, assuring that Magic Johnson’s statue won’t be getting company anytime soon.