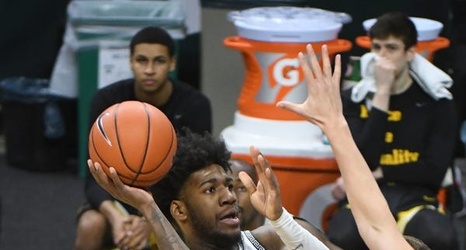 Aaron Henry is taking another shot at the NBA, and this time, it seems like the Michigan State guard has played his last game for the Spartans.

Henry announced his intention to declare for the draft on Monday, and said he will be retaining an agent. While that does not mean he can’t return to Michigan State for his final season, all signs have been pointing to Henry’s likely decision to become a professional.

“Being a professional basketball player has been my dream since I was a kid and after receiving guidance from my parents and my coaching staff, I will be declaring for the 2021 NBA Draft with plans to sign with an agent,” Henry said in a post on Instagram.