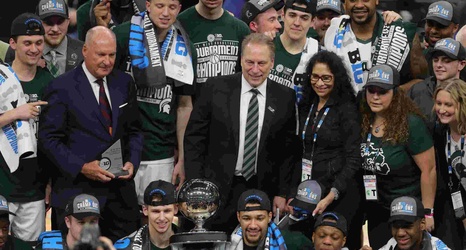 Michigan State rallied in the 2nd half en route to its 6th Big Ten tournament title and third win this season over Michigan, 65-60, March 17, 2019.

CHICAGO — Dwayne Stephens came up with a plan. His boss, Tom Izzo, went with it.

Aaron Henry justified the decision and denied Ignas Brazdeikis in a critical moment.

Michigan State basketball’s assistant coach told Izzo their freshman swingman should defend the Big Ten freshman of the year in the second half, and Henry smothered Brazdeikis for much of the final 20 minutes.