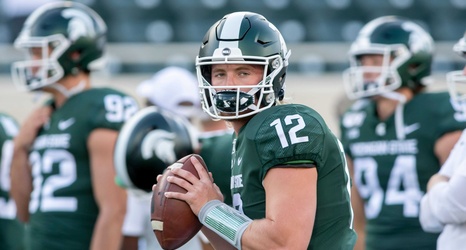 As Michigan State prepares to open the season at noon Saturday against Rutgers in Spartan Stadium, who will be under center remains an ongoing battle.

Spartans coach Mel Tucker said during his weekly press conference on Tuesday no decision has been made and that this week’s practice will be used to determine which player — fourth-year junior Rocky Lombardi, sophomore Theo Day or redshirt freshman Payton Thorne — gets the nod as Michigan State’s starting quarterback.

“We won't be announcing a quarterback today,” Tucker said during his virtual meeting with reporters. “There's been fierce competition at so many positions, including quarterback, and so as this week unfolds and a game plan is installed, we'll make a decision and then we'll go.