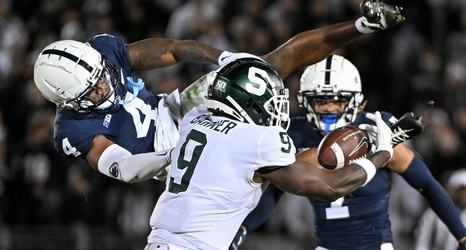 UNIVERSITY PARK, Pa. — Say this for Michigan State football: despite missing a number of players on both sides of the ball Saturday, the Spartans summoned up enough resolve to nearly pull off an upset at No. 10 Penn State.

The defense applied pressure and got stops in the second half. The offense made key plays. The special teams units played big roles.

But it wasn’t enough. And it likely means MSU won’t have enough to go to a bowl game.

The Spartans made it a five-point game early in the fourth quarter, but the Nittany Lions went on a time-consuming march and delivered the knockout punch with an 12-yard touchdown pass from Sean Clifford to running back Nicholas Singleton.