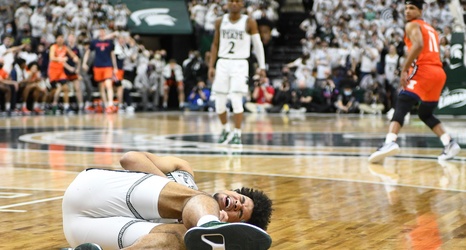 Michigan State has fallen out of this week's Associated Press men's basketball poll after another turbulent week that saw the Spartans drop games to unranked Penn State and No. 12 Illinois.

Since picking up wins in late January over Wisconsin and Michigan — with a one-point loss to Illinois sandwiched in between — Michigan State has been on a disastrous slide in the month of February, losing four of its last five and going 2-4 this month.

Still, Michigan State led the field in "others receiving votes" outside the Top 25, so a quick turnaround could land the Spartans back in, but the road doesn't get any easier.