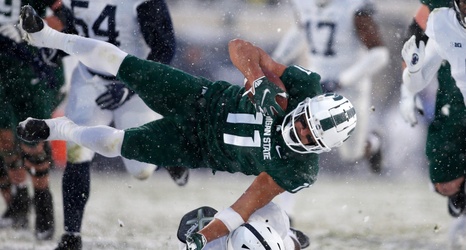 East Lansing — For most of the week, Michigan State was doing what it could to get healthy, from taking cold medicine to spending time hooked up to IVs.

By the time the week ended, the Spartans were doing snow angels, deliriously celebrating a perfect season in their home stadium with a 30-27 victory over Penn State.

It was a remarkable few days to say the least. From the time Michigan State walked off the field in Columbus a week earlier, humbled in a 49-point loss that didn’t seem that close, to the time the Spartans put the finishing touches on their 10th win, so much had happened.