Michigan State Basketball: What will AJ Hoggard’s role be in 2021-22? 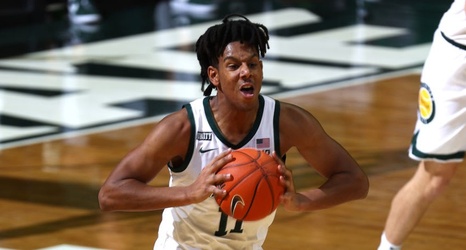 EAST LANSING, MICHIGAN - JANUARY 05: A.J. Hoggard #11 of the Michigan State Spartans looks to pass the ball in the first half against the Rutgers Scarlet Knights at Breslin Center on January 05, 2021 in East Lansing, Michigan. (Photo by Rey Del Rio/Getty Images)

Year one can’t really be considered a success for AJ Hoggard with Michigan State basketball but it also wasn’t a failure.

Hoggard looked like a point guard who showed flashes of being able to lead an offense but his lack of quality shooting was holding him back. Defenses pretty much didn’t have to account for him around the perimeter with his 16 percent shooting from deep and 31 percent field goal rate.