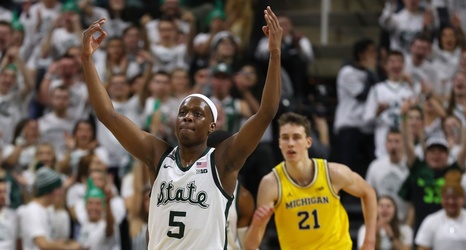 What Cassius Winston did on Sunday afternoon against Michigan was spectacular. OK, spectacular is an understatement — it was unbelievable.

Unbelievable may also be putting it lightly, but the fact of the matter is that he went off for a fourth straight time against the Wolverines, scoring a career-high 32 points to go along with nine assists on 11-of-19 shooting. He had arguably the best game of his career to lead the No. 14 Spartans past the Isaiah Livers-less Wolverines, ranked No. 12.

This was one of those games that we’ll look back on 10-15 years down the line and talk about because it was just that good.