Michigan State basketball runs out of gas in second half of loss to Michigan, 69-50 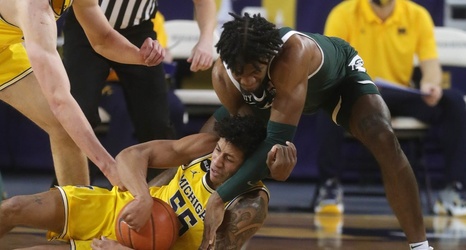 For a fleeting moment Thursday night, it appeared Michigan State basketball was about to make it a game against No. 2 Michigan. Could it be another second-half comeback for a third top-5 upset in eight days?

Julius Marble II sealed Hunter Dickinson’s drive to start the period, then hit a hook shot over the Wolverines’ freshman center at the other end. Aaron Henry then drove around Dickinson for an up-and-under layup that hung on the rim seemingly forever. The Spartans had momentum and trailed by seven.

Maybe it would have been better if the ball kept bouncing.