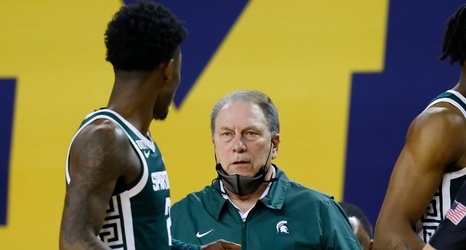 ANN ARBOR — Tom Izzo half-chuckled at the question. Partly because he remained immersed in the frustrations of the moment, partly due to the absurdity of the reality of Michigan State basketball’s past month.

His team moments earlier watched No. 2 Michigan celebrate a Big Ten regular-season championship after its 69-50 win Thursday night, the Wolverines dancing around with maize confetti fluttering down from the Crisler Center rafters onto the court where they stomped all over MSU for 40 minutes. But it was an 11-minute stretch in which a seven-point deficit turned into a blowout courtesy of a 25-4 U-M explosion where the Spartans’ resolve dissolved.