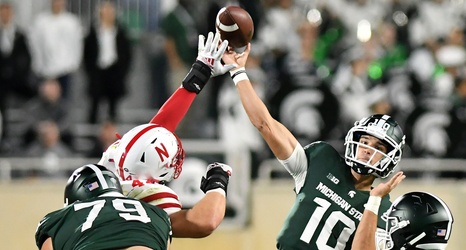 East Lansing — The offense was stuck in the mud on Saturday night, so Michigan State turned to its special teams and then its defense.

With Nebraska ahead, 20-13, with less than four minutes to play and the Spartans without a second-half first down, Jayden Reed returned a punt 62 yards for a touchdown to tie the game, 20-20. Then in overtime, Chester Kimbrough intercepted an Adrian Martinez pass and nearly returned it for a touchdown.

On the ensuing possession, Matt Coghlin kicked a 21-yard field goal to give No. 20 Michigan State a 23-20 victory in overtime in front of 70,332 relieved fans at Spartan Stadium.