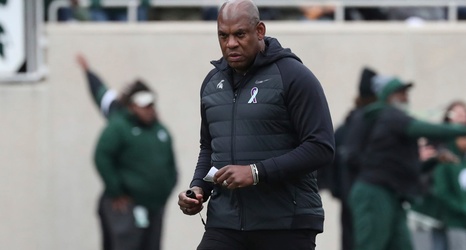 Mel Tucker took time out of a busy recruiting weekend to grab a lightbar to create an iconic and impactful moment.

Photo shoots during official visits are a somewhat recent trend; they're a way to give recruits a chance to flex on campus and after they leave. Few programs do as good a job, though, as Michigan State football’s social media team at delivering high-quality propaganda in the digital realm.

The Spartans’ cameras captured Tucker picking up the brightly illuminated prop, which looked like Luke Skywalker’s self-made lightsaber from "Return of the Jedi." But instead of wielding it like a sword, Tucker put it up to his eye, staring down the green neon bulb like it was a rifle, and took aim.