'Here we are': Stunned Spartans in scramble mode to earn bowl bid 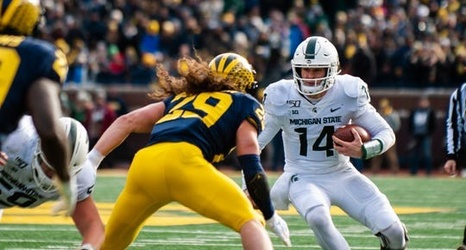 Ann Arbor — There were plenty of adjectives to use on Saturday afternoon as Michigan State’s players and its head coach tried to describe what had just happened at Michigan Stadium.

The 44-10 loss to Michigan— the worst in the series for the Spartans since a 49-3 defeat in 2002 — was called “disappointing” by coach Mark Dantonio while junior linebacker Antjuan Simmons described the Spartans as “stunned” with fifth-year senior defensive tackle Raequan Williams calling the 467 total yards allowed “ridiculous.”

All were apt descriptions, and it’s likely there was some more colorful language used in the locker room or the living rooms of Michigan State fans around the state.