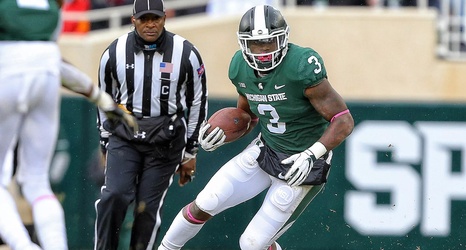 LJ Scott, the Michigan State Spartans running back from 2015 through 2018, has signed an undrafted free agent deal with the Cleveland Browns of the National Football League.

After Scott was not selected in the 2019 NFL Draft, it was initially reported that he would be signing a UDFA deal with the Baltimore Ravens, however when rookie minicamp rolled around last week, it was discovered that the Ravens brought in Scott on a tryout basis only, and did not sign him.

Scott is a Youngstown, Ohio native.