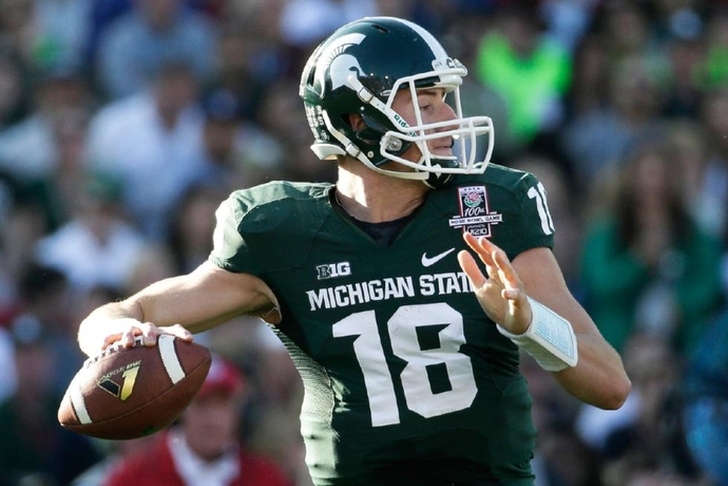 The Michigan State Spartans nearly won the Big Ten last season. They lost to Ohio State and didn't get to the Big Ten Championship game, but would have handled Wisconsin easily. The Spartans return several key players and have the pieces to make a title a reality this year. Here are four reasons why the Spartans WILL win the Big Ten this season.

Oregon Will Make Them Better

In the grand scheme of things, a loss to Oregon won't make-or-break Michigan State's season. If they beat Ohio State, they'll still win the Big Ten and probably make the College Football Playoff. No matter what, playing strong competition like Oregon will improve the Spartans. Playing multiple Mid-American Conference schools won't improve a team like playing a Top 15 squad will. Even if the Spartans lose, they'll be thankful they played Oregon come conference play.

Michigan State has limited teams to less than 20 points per game since 2010. DE Shilique Calhoun could have gone pro, but elected to return. MSU constantly has a great secondary and that should be the case again this season. Pat Narduzzi might be gone, but Michigan State will still have a great defense.

Cook could have gone pro last season and been a NFL draft pick. Instead, he's back for another season. He's incredibly consistent and will be among the best QBs in the nation this season. He has a strong offensive line in front of him, but Cook is quick to release the ball and is more mobile than most think. He only took 11 sacks last season and threw for over 3,000 yards and had 24 TDs. He could improve on those stats this season.

Dantonio might be the most underrated coach in the NCAA. He constantly gets the best out of his team. Yes, Ohio State's Urban Meyer is one of the best coaches in the nation, but Dantonio isn't far behind him. Dantonio might not have the same name recognition as others, but he's an incredible coach.