Michigan State Football: What We Know About The Spartans After 6 Weeks 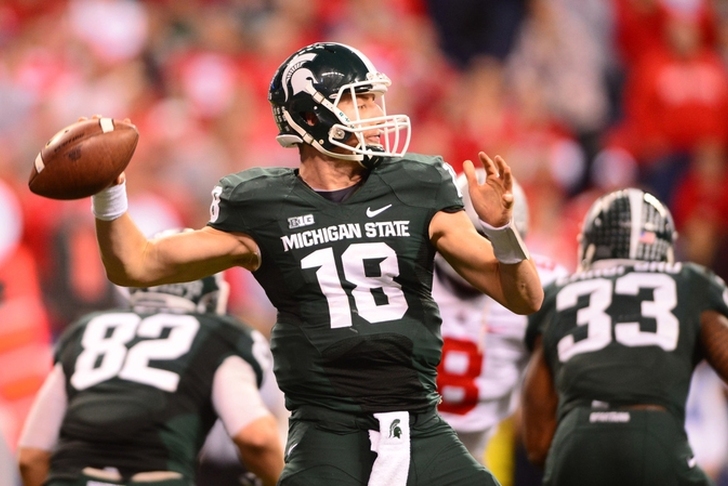 The Michigan State Spartans are 6-0, but have slipped to #7 in the AP Poll. The drop is due to several close wins against Big Ten teams that aren't as talented as the Spartans. However, MSU is still undefeated, something only a few teams can say. Here are five things we know about Michigan State after six weeks.

This is what we expected from Michigan State this season. The Spartans have run the ball nearly 80 times more than they've thrown it, a rarity in today's pass happy college football. What we didn't expect was that the damage would come from two freshmen. LJ Scott isn't getting the majority of the carries, but he's been a playmaker. He's racked up 418 yards and 6 TDs on 70 carries. Madre London has recorded 399 yards and 3 TDs on 95 carries. The duo will be a staple in East Lansing for years to come.

Connor Cook Is As Steady As Ever

The Spartans don't ask Cook to air it out as often as other college QBs, which is why his stats aren't as eye-opening. Still, Cook has been the steady guide of MSU's offense. He's completing 60 percent of his passes for 1,334 yards, 12 TDs and 2 picks. He hasn't really been asked to carry the Michigan State offense, but he will at some point this season.

At the time, Michigan State's 31-28 win over Oregon looked like a resume builder. However, Oregon has since lost to Utah (in a blowout at home) and to Washington State. Of the teams the Spartans have played, only Air Force has a winning record. MSU is without a staple win, although that could change with games against Michigan and Ohio State left on the schedule.

Michigan State is undefeated, but keeps dropping in the rankings because of close wins over inferior Big Ten opponents. MSU is supposed to blowout Rutgers and Purdue, not sneak by them. A win is a win, but the Spartans have raised concerns by not taking care of business in the manner expected of them. On the bright side, MSU can calm worries by beating Michigan this weekend.

This is the most important thing for Michigan State. The Spartans don't have to rely on another team to help them make the College Football Playoff; they just have to win. The close wins might be worrisome, but they are still wins. If MSU defeats Michigan this weekend, no one will be worrying about the Spartans.