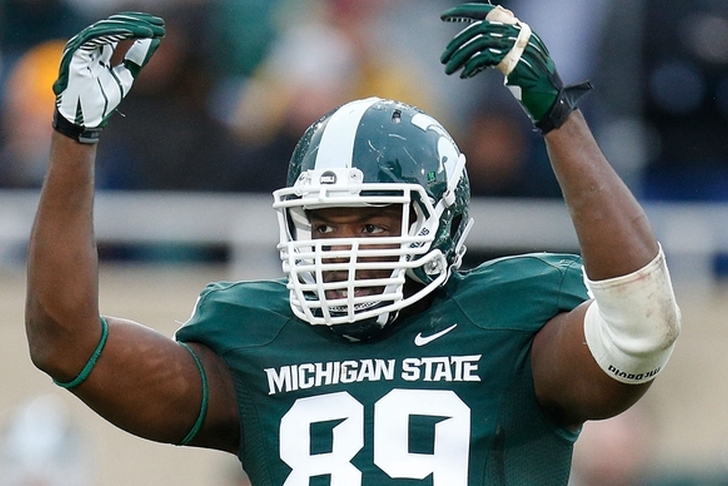 The #4 Michigan State Spartans are 5-0 and streaking towards a potential College Football Playoff berth. Heading into their first out-of-Michigan game of the season at Rutgers, there's plenty of intrigue around the program as they continue to make their case for CFP inclusion. We delve into that in our Michigan State Football Rumors Roundup: Latest Leading Up To Saturday's Rutgers Game.

To football players growing up in New Jersey, Rutgers holds a similar weight to how players from the State of Ohio view the defending champion Ohio State Buckeyes.

That makes Saturday's game especially meaningful to senior MSU defensive end Shilique Calhoun, who grew up in Middletown, NJ. Calhoun expects to have about 50 of his friends and family on hand at High Point Solutions Stadium to watch him suit up against the Scarlet Knights.

“I think it’s going to be special, it’s going to be a good time not only for me but for my family," Calhoun said. "A lot of people will be able to come out and see me. I have older siblings and older generations who have family and they’re unable to travel (to other games).”

Via Matt Charboneau of the Detroit News:

"Since 2010, the Spartans are 17-3 in Big Ten road games and 24-8 overall under coach Mark Dantonio. They are also currently on a 10-game road winning streak in conference, the longest in school history and the third-longest active conference winning streak in the FBS."

A win over an inconsistent Rutgers team in turmoil would push the Spartans' road winning streak to eleven and keep Michigan State in the front of people's minds when it comes to the College Football Playoff discussion.

2017 Ann Arbor linebacker Antjuan Simmons is one of the fastest-rising prospects in the nation right now. He's gained a litany of new offers in the past few weeks as scouts celebrate his athleticism and game smarts, including one from Michigan State.

Simmons was floored by the MSU offer.

“I really like their attitudes and the way they handle themselves as a staff and a team,” he said. “[Getting offered by MSU] was an amazing feeling.”